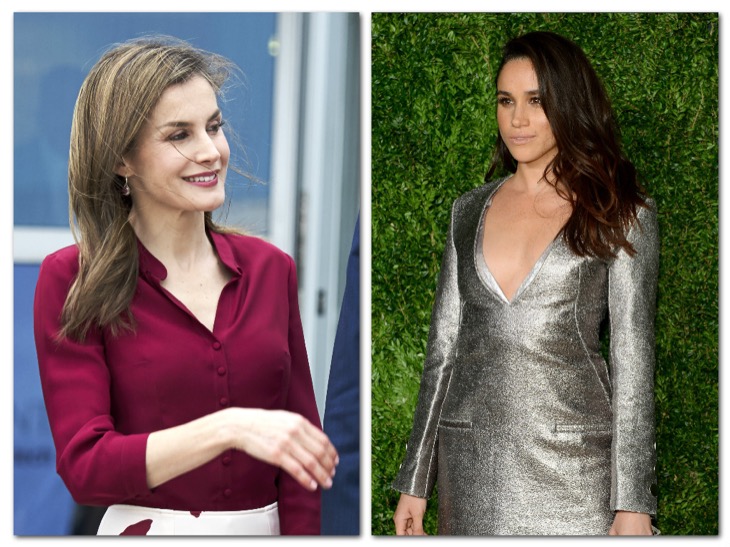 They are beautiful, stylish and well known for their high-profile royal romances. But what a lot of people don’t know is that Spain’s Queen Letizia and Hollywood actress Meghan Markle have a lot more in common than their model-good looks and penchant for couture style. Queen Letizia is married to King Felipe IV of Spain now but before she became a Spanish royal, she had a past similar to Meghan Markle’s.

Here are 5 things that Meghan Markle and Queen Letizia have in common!

Meghan Markle was born in Los Angeles to an African-American mother, Doria Radlan, and lighting director Thomas Markle. Her parents divorced when she was 6. Queen Letizia comes from humble beginning as well. The granddaughter of a taxi driver, Letizia is the first queen of Spanish descent since Maria de las Mercedes de Orleans y Bourbon, who died in 1904.

Both Meghan and Letizia have also had successful careers before meeting their royal beaus. Meghan Markle is best known for her role as Rachel on the hit legal drama ‘Suits’ while Queen Letizia was a successful journalist before she married Felipe in 2004. She also won an award for the best Spanish journalist under 30 in 2002.

Just like Prince Harry, Meghan Markle is very passionate about her charity work and is involved in several different aid organizations. She has worked with World Vision Canada to help support young girls living in slums in Rwanda. Similarly, Queen Letizia works with several different cancer charities and along with her husband King Felipe has donated a million-dollar inheritance from a Spanish businessman to the Foundation for Disabled Persons on the Island of Menorca.

As one of the most stylish royal women in the world right now, there are dozens of fashion blogs dedicated to Queen Letizia’s classic yet cutting edge style. Similarly, Meghan Markle is also getting a lot of attention for her wardrobe. She’s recently showcased her love for British designers, wearing everything from Burberry to Top Shop on the red carpet.