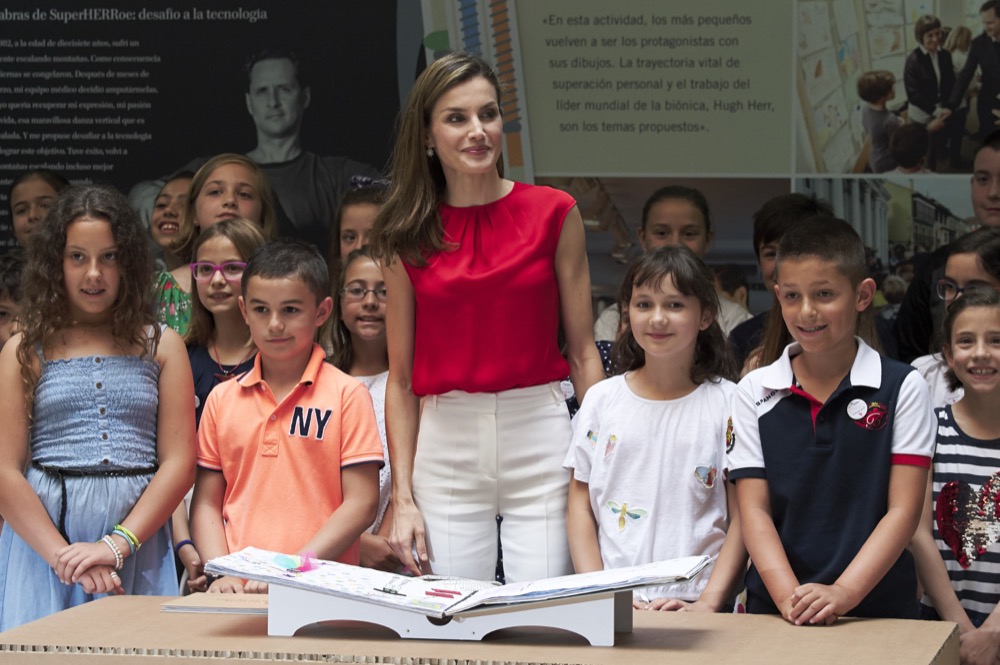 Queen Letizia of Spain wowed the crowds in Northern Spain on Tuesday during a visit to a local school supported in part by the royal family’s Princess of Asturias Foundation.

In the Northern Spanish town of Aviles Queen Letizia delighted young schoolchildren by visiting their classrooms, and the locals turned out in droves to catch a glimpse of their Queen. 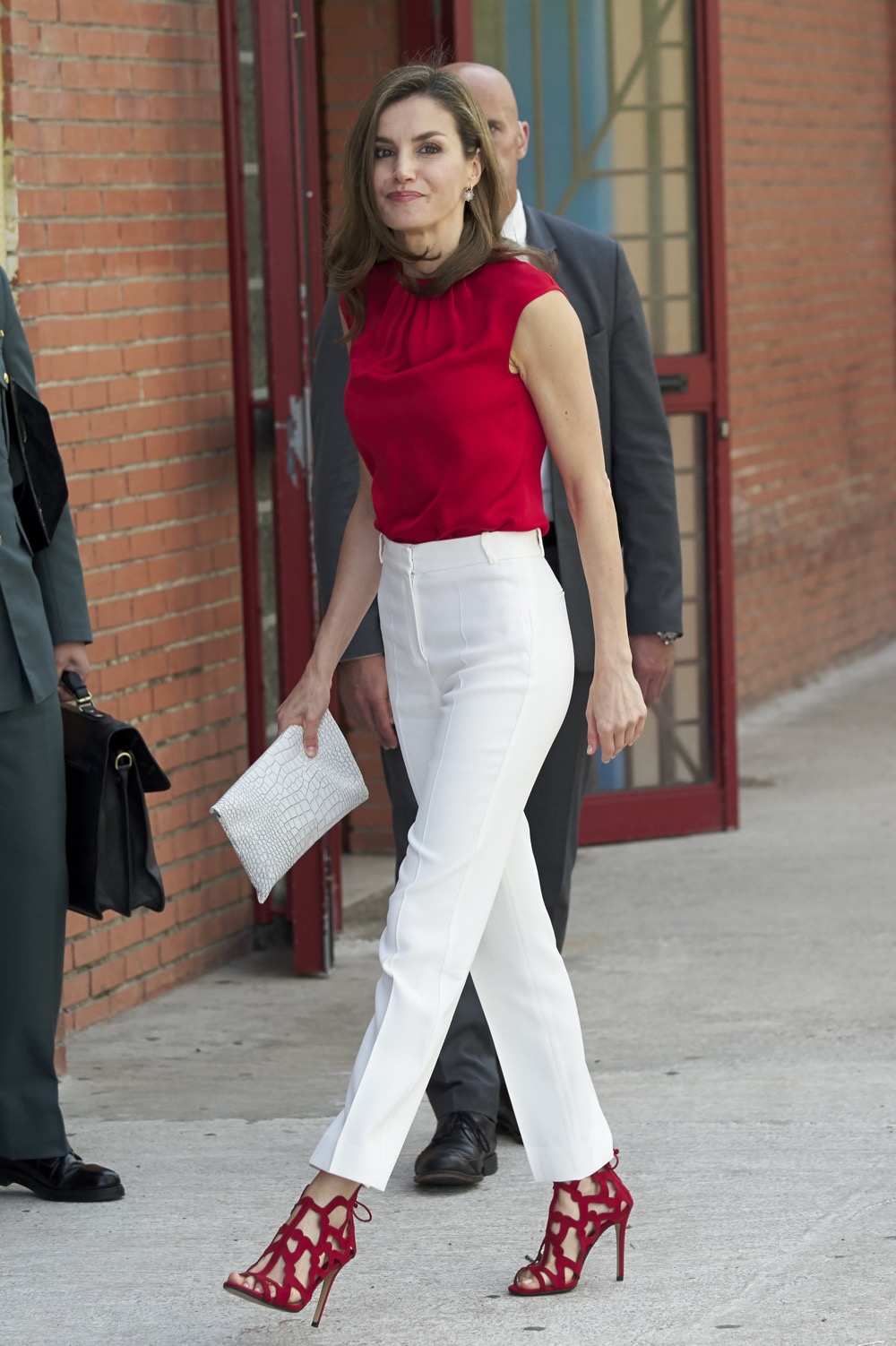 The real attention getter however were her filigreed, cut-out shoes. The red, high-heeled numbers featured lace-up backs with ribbons that peeked out cheekily from underneath her pant hems.

Both the body-hugging blouse and the matching arty shoes were from Mango. Her impeccably tailored slacks were from designer Massimo Dutti. A pair of sparkly, silver orb earrings were the only jewelry visible on the statuesque queen.

Letizia’s shiny brunette locks were worn down straight and loose, and she appeared at ease as she greeted her many admirers.

Hundreds of townspeople lined the streets, cameras in hand, eager to catch a memento of their queen. Letizia appeared gracious and relaxed as she made her way along the barricaded street, shaking hands and pausing for photos.

Mother-of-two Letizia then met with dozens of the El Quirina schoolchildren who participate in the cultural activities program supported by the Princess of Asturias Foundation. 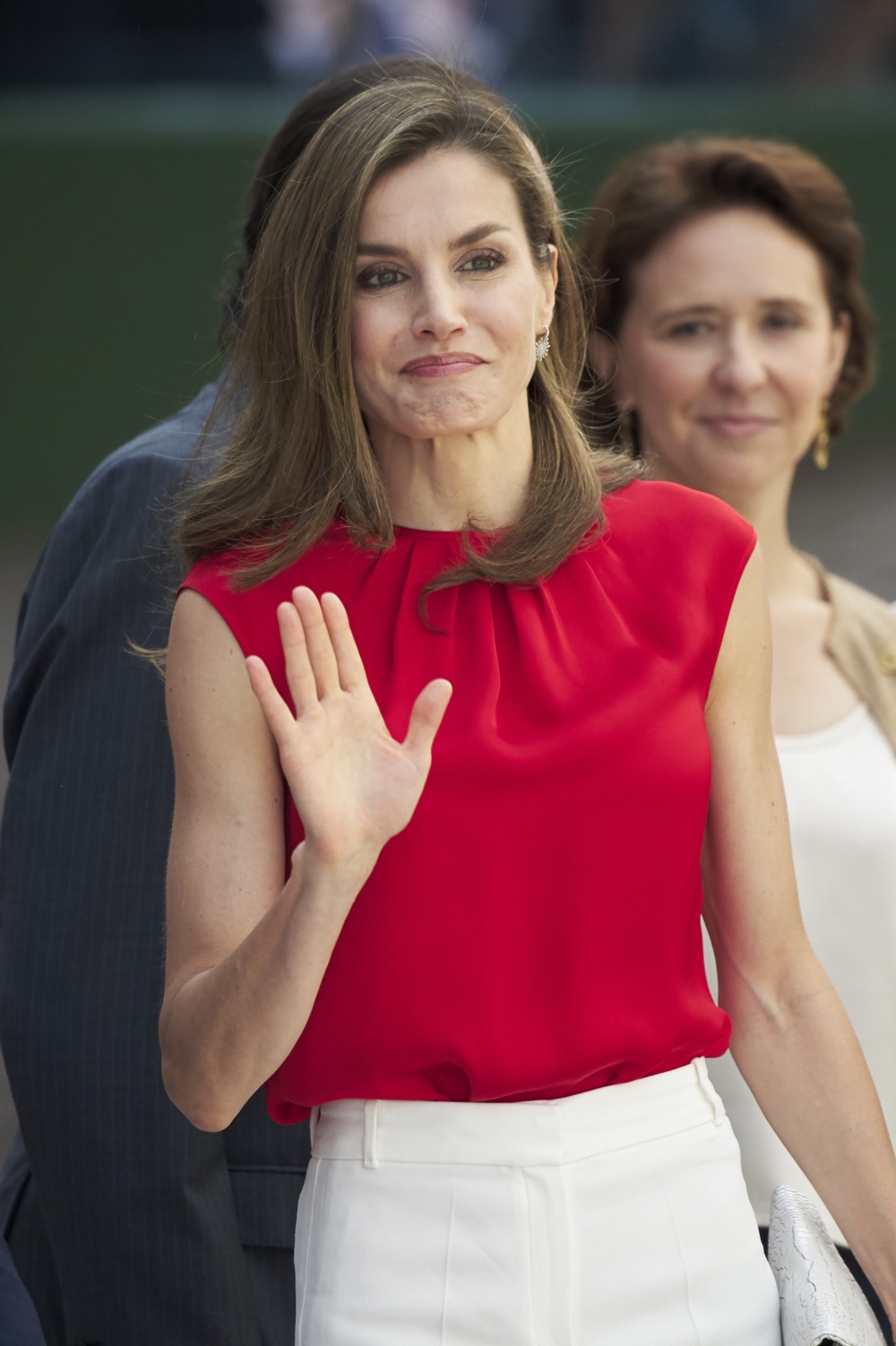 Letizia seemed in her element as she happily looked at the students’ projects and at one point read out loud. For their part, the kids couldn’t have looked more delighted to have Letizia in their classroom, and eagerly showed off the work they’ve done as a part of the “Toma la Palabra” cultural program for schools.

Although her husband King Felipe VI did not accompany her on this visit, they often team up for royal events. The prior day saw the King and Queen visit the Spanish capital’s Prado art gallery in Madrid for the “Art of Educating” (El Arte de Educar) event.

Queen Letizia rarely makes a fashion misstep, and her art gallery visit was no exception. The queen looked like a masterpiece herself, outfitted in a creamy white form-fitting dress paired with a simple but sophisticated snug jacket featuring side-slit, ¾ length sleeves.