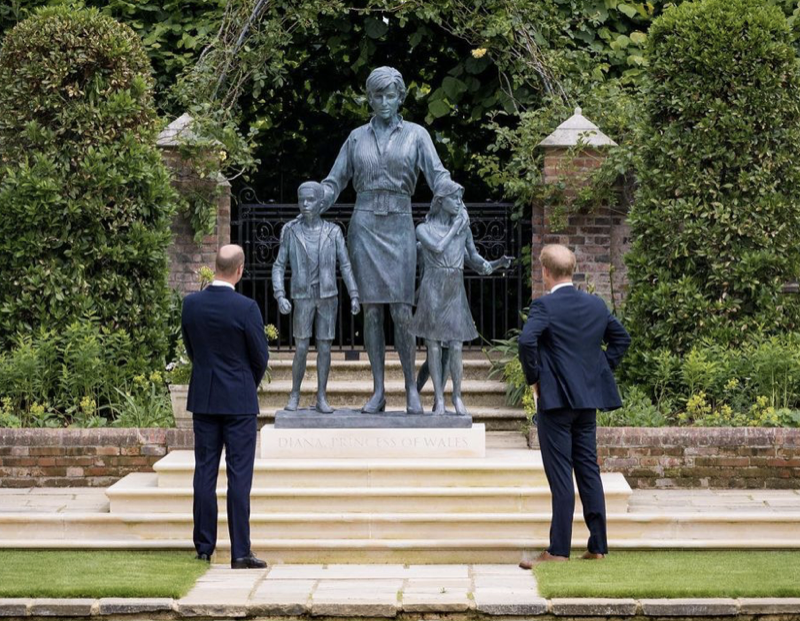 British royal family news reveals that there is exciting news about the recently unveiled Princess Diana statue. On July 1, what would have been her 60th birthday, her sons Prince Harry and Prince William showed off the statue set in the Sunken Garden to the world.

The statue was placed in what was said to be Diana’s favorite garden spot. It was sculpted by Ian Rank-Broadley in honor of what would have been the late princess’ 60th birthday. Diana died in 1997 in a tragic car accident in a Paris tunnel.

The brother released a joint statement: “Today, on what would have been our mother’s 60th birthday, we remember her love, strength and character – qualities that made her a force for good around the world, changing countless lives for the better.”

“Every day, we wish she were still with us, and our hope is that this statue will be seen forever as a symbol of her life and legacy.”

The Princess Diana statue was a hyped and anticipated memorial unveiling but all eyes were on her sons as they are reportedly warring. Nonetheless Prince Harry and Prince William were the picture of decorum for a few minutes at least as they unveiled the bronze statue.

It has just been announced that ahead of the 24th anniversary of her death that the Historic Royal Palaces will grant the public special access to the statue next Tuesday. No doubt the decision was approved beforehand by her sons.

The statue is open to the general public from Wednesday to Sunday, as a result of the COVID-19 pandemic. But on August 31, visitors may view the memorial from the Cradle Walk around the Sunken Garden from 3pm to 5pm.

A spokesperson for HRP said about the event: “We acknowledge that there will be interest in viewing the statue on that day. So we will be providing access to the Cradle Walk which is essentially the beautiful walkway around the Sunken Garden.”

“We will be opening that up, freely available, for passers-by or anybody who wants to stop and take a moment on that Tuesday, specially for the anniversary.”

It’s thought that the princes will celebrate the anniversary privately.

Be sure to catch up on everything happening with the royal family. Come back here often for Princess Diana news and updates.