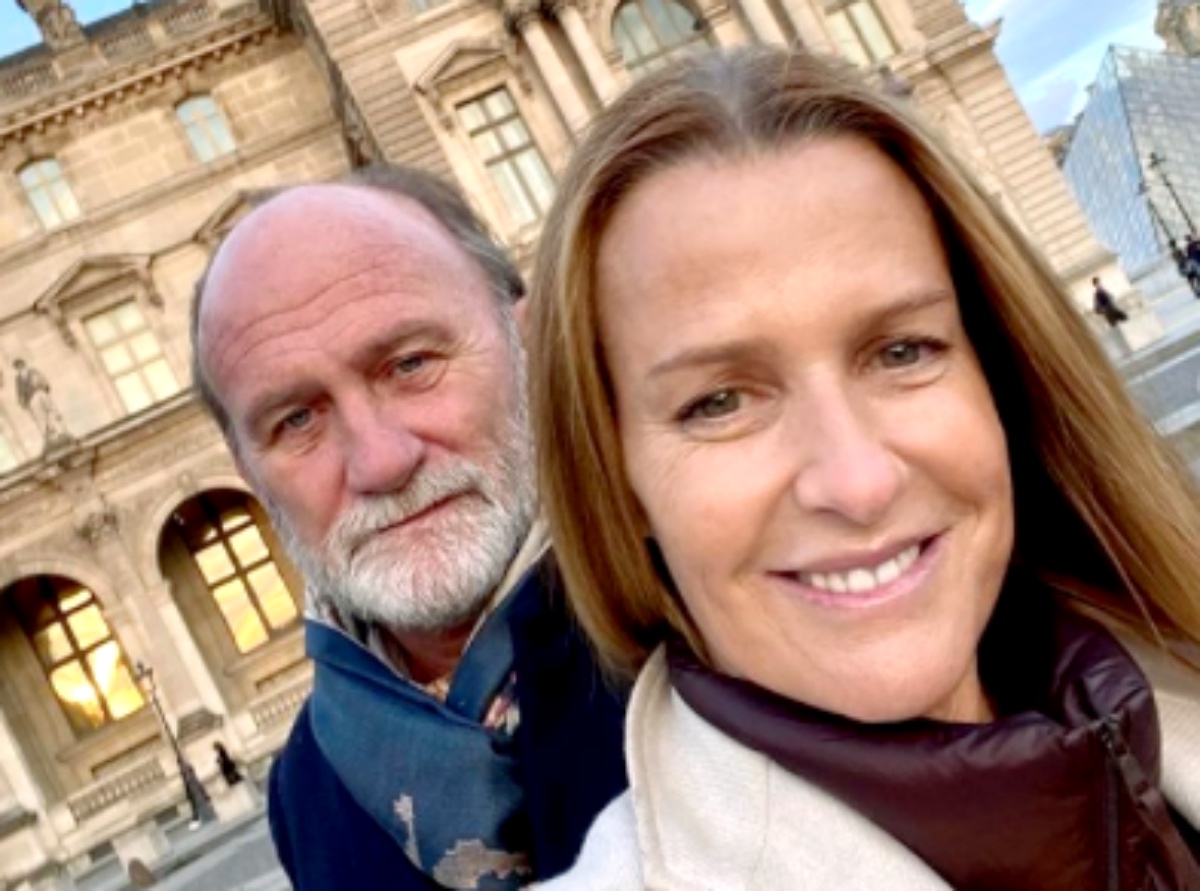 British Royal family news reveals COVID may have worked to postpone her nuptials, but Lady India Hicks is no less excited to be walking down the aisle with her partner and the father of her children. She once opposed the idea of marriage, now, the 54-year-old is excited for her upcoming marriage to David Flint Wood.

Who’s up for a little forever, and then some?

Prince Charles’ goddaughter Lady India Hicks shared her joy at having to get married to David Flint Wood, her partner of 26 years and the father of her five children, next week, after their initial wedding plans were put on hold as a result of the pandemic.

Lady India is no stranger to the occasion of weddings as she was present in one of the most iconic weddings in recent history, that of Prince Charles and Princess Diana. She served as a bridesmaid for the ceremony, and many years later, despite not highly rating the need for weddings, she’s about to be the bride.

She shared an adorable throwback picture of her and her fiancé on Instagram. The snaps were taken by David Loftus, who will be covering her wedding next week. 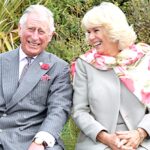 “This time next week I will be married. MARRIED!” she captioned the snaps. “Neither of us have ever been married before so we are both quite excited”.

Miss Hicks, who is the granddaughter of Earl Mountbatten, had long insisted that she had no plans to marry the former advertising executive, even after giving birth to five of his kids. She did have a change of heart and shared the news with the world on her Instagram 28th November 2020.

Along with revealing the thrilling news, she also recalled a heartwarming encounter that happened between her youngest child Domino, 13, and her teacher in relation to the upcoming wedding.

‘”My Mother is getting married” Domino was telling her teacher. “How lovely, who is she marrying?'” the teacher asked. ‘My father’ “came the reply,” she added on Instagram.

“25 years ago @davidloftus took these photographs, 25 years later he will photograph us again on our wedding day”.

The excited bride-to-be shared a picture of her wedding invitations, writing that the pair’s ceremony will be at the Brightwell Baldwin Parish Church in Oxfordshire followed by a reception at the Lord Nelson pub.

Lady Hicks on Postponing Wedding Due to COVID Limitations

In December, Miss India Hicks revealed that coronavirus shattered their plans for a romantic wedding, adding that they were eventually forced to postpone their big day.

“Today I should be David’s wife. Yesterday we were meant to get married,” she said at the time.

“Way back in early September we set the date for our tiny wedding,” Lady Hicks said, adding that the ongoing pandemic and the health guidelines it caused tried to cancel out most of their original plans for their big day. “We sent out invitations, designed dresses, and debated vows (to obey or not to obey?) But as the weeks passed the romance did slightly slip away.”

“I think the crunch came when our priest told us we could not have hymns that might be hummable – hummable hymns are not COVID protocol. And so we will wait a little while longer, which is OK because we’ve already waited 25 years.” 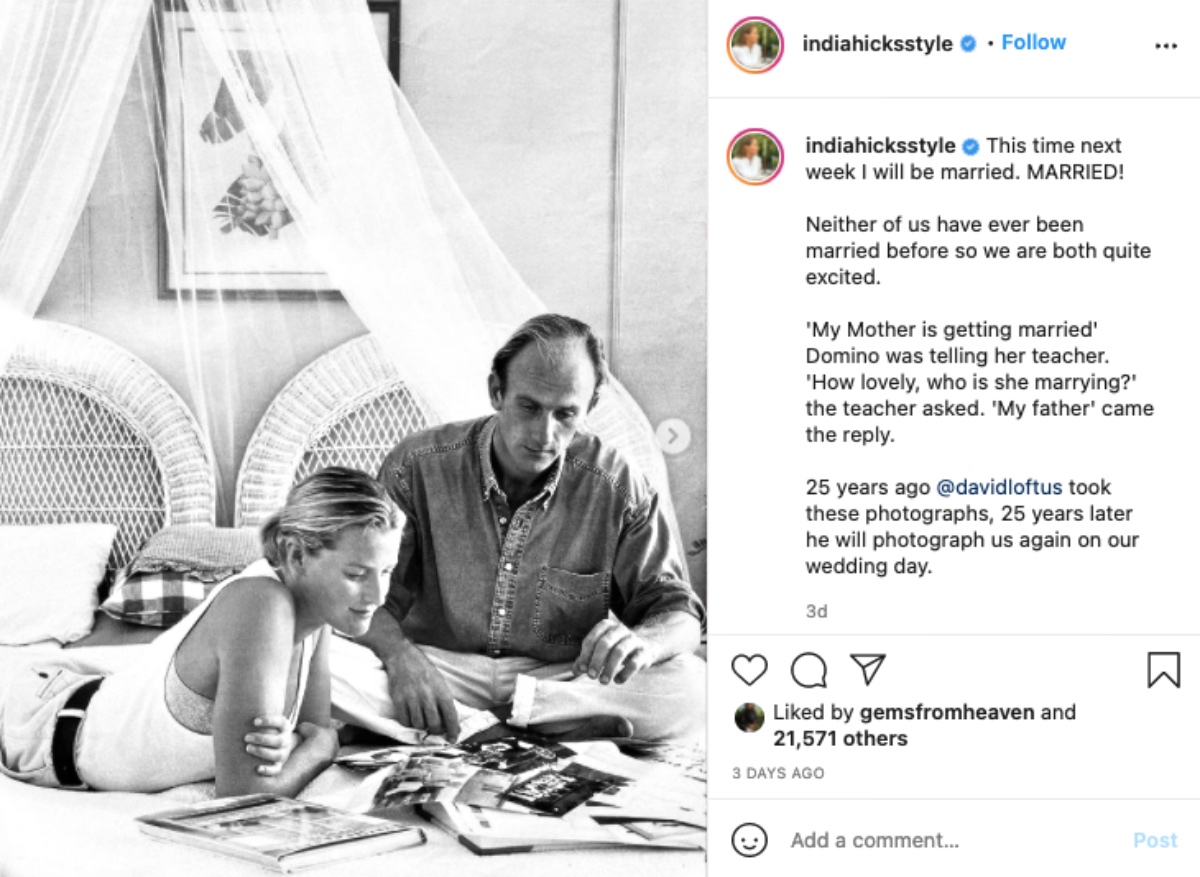 The postponement came just a few weeks after the pair announced their wedding plans.

Lady Hicks made the announcement with a picture of her and her longtime partner together, writing: “David and I are getting married.”

“Five children and 25 years later! We quietly decided a few months ago. A celebration of unflinching love. Until death do us part.”

Miss Hicks and her fiancé David, 60, former Saatchi & Saatchi executive, moved to the Bahamas in 1996 and have restored and built four houses and a hotel there.

The couple share five children together: Felix, 24, Amory, 22, Conrad, 18, and Domino, 13. They also adopted a young Bahamian, Wesley, now 24, after his waitress mother passed away due to cancer.

Last year, the entrepreneur and philanthropist said: “People often ask us why we have never got married but we have just never felt the need. Being strangers in a strange land has bonded us more than any ceremony could.”

She shared similar sentiments in 2018 when she revealed that “the children all carry his name, which is important to me. Our family unit is so strong but I have no ambition to be married at all.”