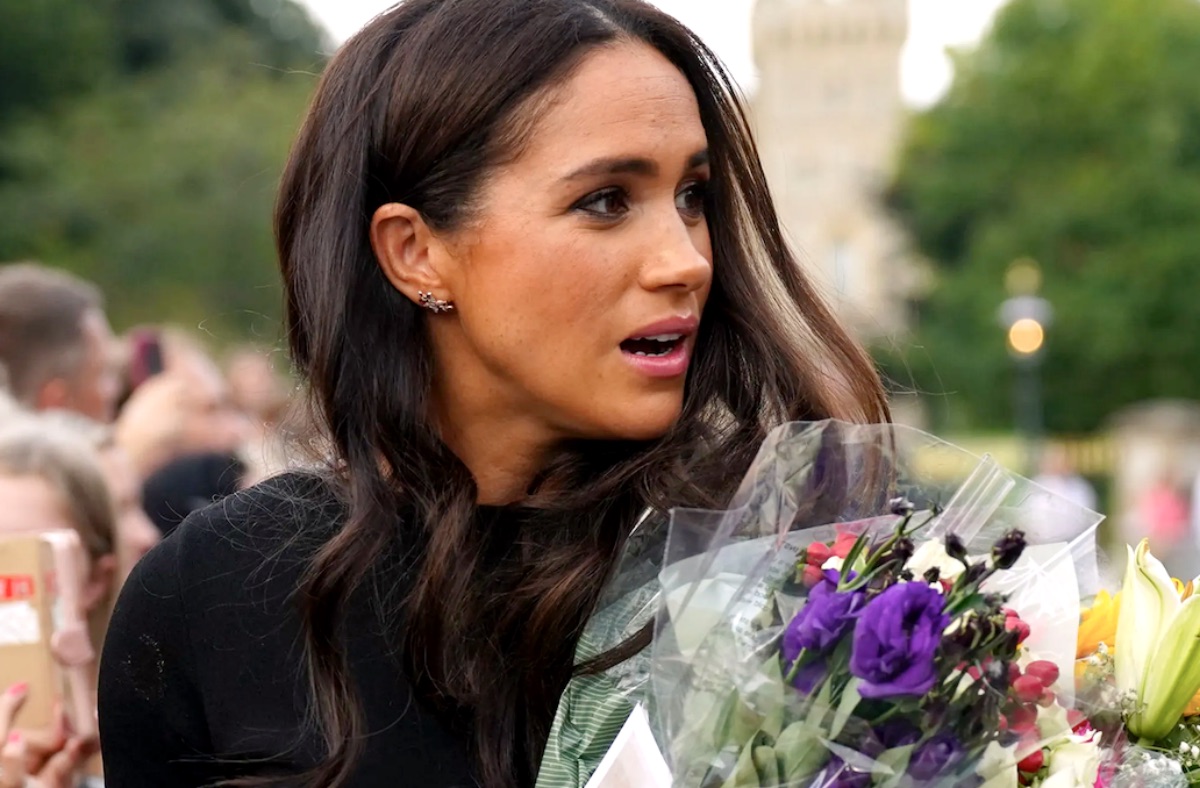 Meghan Markle recently joined her hubby Prince Harry in honoring the late Queen Elizabeth II. But one particularly awkward moment sparked a backlash over the Duchess of Sussex’s behavior. And it contrasted with Kate Middleton’s perfection in following all the royal protocol.

Find out what Meghan did that caused so much controversy. And learn how the Duchess of Sussex even allegedly risked the rest of the royal family in seeking publicity for herself. Get all the details below.

Kate Middleton, Prince William, Meghan Markle, and Prince Harry all recently reunited to honor Queen Elizabeth II. But one awkward scene made some royal experts wince over Meghan’s failure to follow royal protocol. And the Duchess of Sussex got caught on video in a situation that sparked a backlash, noted Page Six.

As shown in the clip, Meghan informed an aide that she did not want to hand off the flowers that she held. And a second aide had to get involved to persuade the actress to surrender her bouquet. As a result, one royal expert even labeled the situation risky for everyone around Markle. “From my perceptive, it makes sense [Meghan and Harry] wouldn’t be holding on to large items given to them from the public just on a security level,” pointed out royal expert and political commentator Jonathan Sacerdoti.

Meghan has awkward exchange with royal aides as they help her and Harry with flowers https://t.co/kCzf3IsLCs

And Sacerdoti also noted that the royal family knows to follow protocol. However, royal rules become especially important in high security risk situations like the walkabout around the castle. Meghan should have obeyed the aides, noted the royal expert.

But Sacerdoti speculated that Meghan wanted to stage a photo opportunity for the paparazzi. And he also suggested that she wanted to hold onto the flowers for an “iconic photo” opportunity where she bent down herself to put down the flowers. However, Markle persisted in trying to break royal protocol and thereby risk everyone around her.

And Sacerdoti also pointed out that the Duchess of Sussex has a track record of following her own desires rather than follow protocol. However, he emphasized that she should have listened to the aides. “Everybody in the royal family who’s taking part in the mourning process is obviously in a stressful position,” he noted. “And they’re all relying on the team of advisers and planners who are working with them. So I think it would be normal to take the advice and just go along with the plans put in place.”

For instance, he compared Meghan to William and Kate. The Prince and Princess of Wales knew exactly what to do. And they followed the royal rules by taking bouquets and handing them to the aides. Because that process also lowers risks, security concerns made it important for everyone to follow the guidelines.

“William and Kate know how things are done. They take the bouquet and they pass them to the aides close behind them. They can’t carry all those flowers. The aides are going to put them with the other tributes,” noted Sacerdoti.

And the royal expert found Meghan’s reluctance particularly baffling because Prince Harry had complained that he lacked sufficient security after resigning from the royal family. “When they go into these situations, it’s a higher-risk security situation,” said Sacerdoti of Meghan and Harry. “Because they’re high-profile people, and they are the very people complaining about their security, so to not take the advice from the people there to handle you is risky.”

However, he also noted that Meghan breaking rules during mourning puts her in an especially bad light. “It generally makes sense to follow the rules,” added Sacerdoti. “But I don’t think Meghan Markle likes following the rules, especially when they’re British rules.” And he emphasized that mourning “is the moment for being part of the team, blending in, taking part of the burden off everyone else.”

Looking at how some members of the royal family did not want Meghan present, the royal expert offered his insights. “That’s why people were worried about the presence of Meghan Markle,” he stated. “Because this moment is all about the Queen’s contribution and it shouldn’t be about us discussing Meghan Markle.”

Tell us what you think. How do you feel about Meghan Markle refusing to hand off her bouquet of flowers so she could stage a photo opportunity for paparazzi? And after you share your views, check back on our site for more royal family news.