Last month, the Duke of York’s eldest daughter, Princess Beatrice, welcomed her first child with husband Edoardo Mapelli Mozzi. Beatrice gave birth to her daughter in a London Hospital. At the time, it was reported that her father didn’t visit her in the hospital because of the ongoing civil lawsuit by Virginia Roberts Giuffre, and his wish to keep out of public sight in order to avoid being officially notified about the case.

However, last week, Prince Andrew’s legal team seemed to change their tactics by confirming that Andrew has indeed received his court papers.

With that taken care of, Andrew can now walk in the sun again and visit his daughter and her baby, instead of staying in place at his mother’s grand Balmoral Estate.

Prince Andrew was pictured driving to meet his daughter after she gave birth to a baby girl on Saturday, September 18 at Chelsea and Westminster Hospital in London. 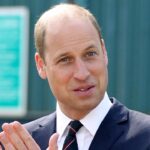 While this is Beatrice’s first child, her husband Edoardo Mapelli Mozzi shares a young son, Wolfie, with his ex-Dara Huang. At the time of the baby’s arrival, the couple shared that they can’t wait for her to meet her big brother Christopher “Wolfie” Woolf.

Sarah Ferguson, Princess Beatrice’s mother, left the Aberdeenshire estate and made the 500-mile trip to London to see her newest grandchild.

The couple revealed their baby’s name on social media, with the baby’s middle name paying tribute to her great-grandmother, Queen Elizabeth the II. Sienna Elizabeth Mapelli Mozzi is Sarah Ferguson and Prince Andrew’s 2nd grandchild and the Queen’s 12th great-grandchild.

The couple also shared that big brother Wolfie is delighted with his baby sister.

👣 We are delighted to share that we have named our daughter Sienna Elizabeth Mapelli Mozzi.

We are all doing well and Wolfie is the best big brother to Sienna. pic.twitter.com/6abMIXDSLT

In pictures released by The Sun, the royal was seen smiling and waving at the crowds as he left Balmoral Castle for the first time in weeks.

The Duke is facing a civil lawsuit filed in a New York court, which could cost him a substantial amount of money if he loses. Though the figure asked by Giuffre’s lawyers is yet unknown, it is believed to amount to millions of dollars.

“In this country no person, whether president or prince, is above the law, and no person, no matter how powerless or vulnerable, can be deprived of the law’s protection,” Ms Giuffre’s lawsuit stated.