The Queen and Prince Philip are happily blessed with four children. Presently, Her Majesty has a lot of grandkids and great-grandkids, with four welcomed this year alone.

According to a royal expert, the Monarch most relies on the wife of his youngest child for support, especially after the passing of her husband.

Queen Elizabeth may not have had her dreams of a large family Christmas at Sandringham this year come true, but she can always rely on Sophie to make her feel better over a cup of tea. 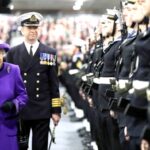 Queen Elizabeth has always been a family person, and she gets to spend time “on a regular basis” with Prince Edward, 57, and his wife Sophie, 56.

The pair live just 11 miles away from the Monarch’s residence at Windsor Castle. The couple currently live with their two children, Lady Louise, 18, and James, Viscount Severn, 14, at Bagshot Park, Surrey. It is understood that the Queen included the couple among the guests for her slimmed down Christmas celebrations at Windsor Castle.

According to Sophie, living that close to the Queen is a privilege for both them and their children.

However, it is understood that Sophie and Edward’s kids are firm favorites with the Queen.

Royal author Phil Dampier previously told Fabulous: “Lady Louise is definitely a favourite of the Queen and I can see her having an important role in the Royal Family in the future.

“Her Majesty sees a lot of Edward and Sophie and their children at Windsor Castle as they live nearby at Bagshot Park.”

Phil added that the Queen is very close to “Sophie, and of course there has always been a bond between them because Sophie nearly died giving birth and Louise has had her eye condition to cope with.”

Speaking about Louise, Phil added: “She has grown into a lovely and intelligent young woman and the Queen adores her.”